This is one of my occasional series of posts about airplane mechanic school. You can read the other posts in the series here.

Believe it or not, I’m over the hump. I’m 2.5 weeks away from the end of the fifth quarter of a two-year program. We go to school year-round, so I will be finished at the end of winter quarter, in March, 2015.

It has been quite a ride so far. I have had the unique experience of joining 3 different cohorts during my time in school. This is because at the end of the second quarter 3 people were asked to move out of our original cohort to bring the class within the FAA-accepted ratio of students to instructors. The original cohort had some really unpleasant characters in it so I didn’t mind moving. As it turned out, the next cohort I went to were a wonderful bunch – friendly, helpful and mostly hardworking. I did two quarters of Airframe with them, then they graduated last quarter. Now I’m doing the PowerPlant classes with a group who started in fall of 2013.

So, this new group … so much to say. I’ve taken to calling the kid next to me “Li’l Bastard” after the “Li’l Bastard” line of products that Bart uses in the Simpsons.  Amusingly enough, this classmate’s last name is Bartman, so it seems fitting, but mostly it seems fitting because he’s never happy unless he’s causing some sort of low-level mischief. He also creates a full skillet breakfast in the microwave about 3 mornings a week – he brings a butcher knife, cutting board, onion, raw eggs and an avocado and does it right at our shared table. Ah, youth. 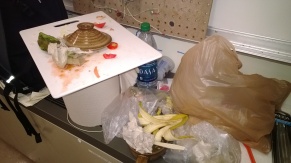 Not sure where the banana peel came from, but this is pretty much the aftermath of the breakfast preparations.

Then in front of me I have two 19-year-old angry Republicans. They get pissed off about everything, but whenever I ask, “Why are you guys so angry?” they furiously respond, “We’re not angry!” Mmmkay … I think one of them is trying to convert me to Catholicism. They fight a lot with the more liberal members of the class, but mostly they fight with each other, so much so that I wonder if they are secretly in love. I have asked them about this a couple of times, but it hasn’t gone over well.

You might wonder if I ever learn anything about airplanes with all this other stuff going on. Yes, indeed I do. We spent the first 5 weeks of the quarter learning about reciprocating engines. Recips are similar to car engines – they run on internal combustion: cylinders, pistons, crankshaft, etc. They’re OK, I guess, but they’re really, really, really inefficient (as are car engines, BTW).

We did a project where, in teams of 4, we took a Lycoming 480 cubic inch 6-cylinder recip completely apart, and measured all the little bibs and bobs inside. The coolest thing about that project was that I know so much about the innards of engines now, I’ll be able to completely shut down any Oil Can Henry employee who tries to tell me that my engine is full of sludge and needs their $100 treatment right away. Can’t wait for my next oil change (insert evil laugh). 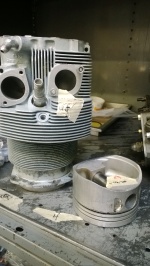 80 cubic inches of inefficient power, baby! This is a cylinder and piston from the Lycoming. The piston is almost as  big across as my hand. 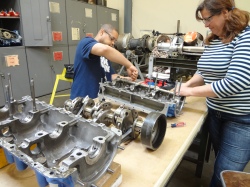 The two halves of the crankcase, with the crankshaft between them.

Now we’re learning about turbine engines. I love turbines. You know how they work? Basically they take in air, send it through compressor blades to squeeze it, set it on fire and shoot it out the back, through a turbine. Sometimes the turbine turns a propeller, sometimes it turns a big fan at the front (most modern jet engines work this way) and on the old-school turbines, it just turns the compressor blades that squeeze the air.

They’re remarkably simple in their overall concept, but very complex in execution because the way they air flows through the various stages has an effect on efficiency and stability. Oh, and ONE compressor blade on a Rolls Royce Trent turbofan engine costs as much as a typical family car.

As I go through this program and meet more and more people in the industry, I learn more and more about the jobs that are available. My new favorite is test flight mechanic, so I’m going to do some research and figure out if I can make that happen at some point in my career. But, in the meantime, the turbine engines await.