Next week I’m going to Vegas to participate in the Aerospace Maintenance Competition. It’s put on by various manufacturers and airlines as a way for them to do research about their products and methods while giving mechanics an opportunity to show their stuff. Along with my team I’ve been hard at work increasing my skill level – I’m only halfway through school, and I haven’t had the classes in aircraft structures or anything to do with engines. And even with the topics I have studied, we don’t get a whole lot of practical experience of any one task.

So, I have been spending my free time riveting, installing brakes, getting comfortable with the multimeter, plumbing the many mysteries of pitot/static systems and airspeed indication, and using my management skills to help move along the rather large project of training 5 people of varying skill/experience to do these various tasks, in public, under pressure, at a respectable level.

This week we got our task assignments. I’ll be responsible for: avionics troubleshooting; electrical system troubleshooting; sheet metal repair (hello rivets); answering a bunch of questions about the inventors and mechanics of early aviation; sealing the inside of a fuel tank and the windows of a flight deck; answering a bunch of questions about Federal Aviation Regulations; and removing and replacing some part of a giant turbine engine.

Highlights from the past couple of weeks:

I am a better riveter! Oh songs of joy, I don’t suck at riveting any more. Here’s the project I completed over the last few days. I had one hole go oversized because I had to drill the rivet out, and two of my countersinks were a bit wonky, but if you could see my first ever riveting project you would know how far I have come. 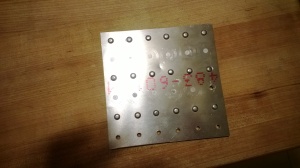 Installing a landing gear brake and wheel assembly is NOT like changing the tire and brake pads on your car. Most aircraft wheels have a multi-layered disk – each layer spins freely to dissipate heat. But then, because that’s not complicated enough, each layer has “keys” or protrusions that have to line up with the other layers’ keys before the wheel can go on.
Like this:

The only way to line up the keys is to spin the wheel while kind of rattling it to get one set of keys to line up at the bottom. You can’t line up the keys and then slide the wheel on – it just doesn’t work that way. They don’t want to line up. They want to get all cattywampus. They want you to spin that wheel. The wheel is heavy. Very heavy. I was able to spin it, but it was a near thing. Two teammates couldn’t budge it.

Sadly for Manly, Langley was a poor aeronautical engineer, and his plane collapsed and crashed immediately upon being launched into the air over the Potomac River. Amazingly, Langley tried to claim the first powered flight … even though all he achieved was the free-fall of his painstakingly (but poorly) constructed airframe.

Powered flight developed pretty quickly – when you think about it – just a little over a century ago we didn’t even know how to fly. Now, 111 years on, we casually fling shuttles into space. But then Manly’s story makes you wonder how things would have been different if his engine had gotten more attention back in the day.