(Correction – my traveling companion, K, reminded me that our friend in Biharumulo was named Daniel, not Patrick as I remembered.)

At the end of the last installment we were making for Biharumulo, Tanzania, hoping to get there and find lodging before dark. We rolled into town at about sundown. Biharumulo is a small place, but since it’s on the trade route there are plenty of places to lodge – guesthouses consisting of concrete block or mud buildings surrounding a central courtyard.

As we approached several guesthouses in turn, a strange thing kept happening. I would ask the proprietors if there were rooms. They would say yes, and show me one. Then I would pantomime asking for two, and they would say no. This happened at the first two or three lodgings we tried. After the third, I looked around at the town, noted a lack of vehicles that might indicate lodgers passing through town, and noted how many guesthouses there were. I could not believe that every place was so booked up that no one had two rooms.

I wondered if they thought I was asking if both of us could stay in one room – in this conservative part of Tanzania, the answer would be no. As we were standing outside yet another lodging, trying to figure out how to work around this misunderstanding, we were approached by a local,  Daniel, who knew enough English to figure out what we wanted and translate to the proprietor of the guesthouse where he worked.

Some interesting details: we were asked to sign the guestbook, which included a column for our tribe. We paged a ways back through the book and noted that we were the only “mazengu/mazenga” entries.

The price list. The current exchange rate is 1621 TZS (Tanzanian shillings) to 1 USD 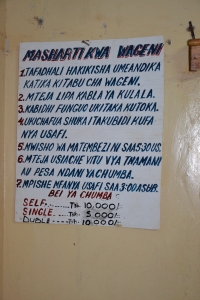 I’ll back up a bit here and say that as we planned the trip I did wonder what sorts of sleeping accommodations we would find on our non-tourist route through East Africa. I knew to expect very simple accommodations but wasn’t sure what that would transIate to in actual experience.  As it turned out, it was fine. Our place in Biharamulo was very clean and seemed safe. K was generous enough to let me have the one “self contained” room, which meant it had an attached bath, which, while rudimentary, got the job done. 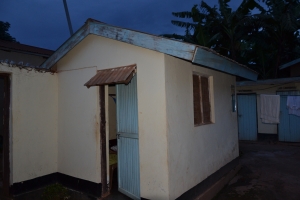 K’s room from the outside

IIRC this was K’s room. This was the widest angle shot available since the room was quite small. 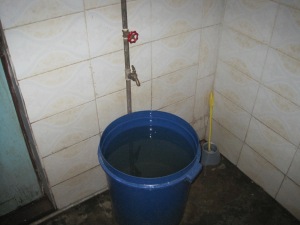 This place had cold running water courtesy of a rooftop cistern. In lieu of running hot water there was a cauldron of water boiling in the courtyard – half a bucket of hot and half a bucket of cold got the job done.

The courtyard, and the cauldron.

Daniel shepherded us through dinner (stew made from the local lake fish) and then it was early to bed since there isn’t much to do in a small Tanzanian town after sundown. We were awakened at about 5 the next morning by the call to prayer – and back on the road by 6, on to the next part of our adventure.