Once upon a time, not too long ago, I road tripped through the lower third of Africa. It all started when a friend left a job in Uganda for a job in Mozambique. She moved her family (3 kids and 5 pets) by air, then started hankering for her vehicle. In many parts of Africa a car is hard to come by. There are huge duties attached to importing them into the country, and since there are no auto manufacturers in Africa, they all have to be imported. Japan sends a lot of their used cars over to Africa, and once you have a good one you want to hang on to it.

And so it was that her brother, K, and I met in Kampala Uganda and drove to Maputo, Mozambique. I landed in Entebbe, Uganda on the Sunday after Thanksgiving. A driver met me for the trip up to Kampala and the inimitable Fang Fang hotel.

When you have been vertical for the past 36 hours every hotel is a luxury hotel. The Fang Fang was mostly OK, except for the lamp cord: 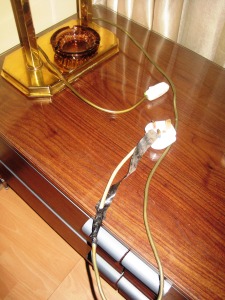 We had budgeted a day in Kampala to do final preparations. A friend of the car owner had prepped it for the trip, but there was one detail still undone. We had been told we needed a certificate from Interpol, stating that the car had never been reported as stolen. We got differing sets of advice about the importance of this piece, and differing sets of advice about whether we needed another document, the carnet du passage.

We eventually determined that the carnet was obsolete but that the Interpol cert was still necessary. It’s interesting that even in this, the age of information, some facts are virtually undiscoverable. We had no way of knowing what was accurate or whether there were still more details we didn’t even know about. We could only prepare as well as possible, based on the information we had, and then hope that we would not get stuck at a border crossing for lack of the correct paperwork.

So we spent that first Monday in the intimate, python-like embrace of Ugandan red tape. We started at the Interpol office. When we arrived, we were shunted to a large canvas tent full of people punching away industriously at typewriters and adding machines. There a nice man told us that we would need to go to the US embassy and get someone to vouch for our characters. This seemed a bit much when we just wanted a piece of paperwork about a car, and, as it turned out, we were right, it was more than we needed to do, but just barely.

Once we had sorted out that misunderstanding, we were directed to a concrete block building from whence our certificate would be issued. Inside the office we found a gentleman in a very braid-bedecked police uniform, who explained that our next step would be to take a triplicate form to the bank where we would pay a fee and bring back two copies of the form, stamped to prove we had made payment.

As we were to discover, over and over during our trip, Africa is a land of bureaucracy, involving sheaves of triplicate and quadruplicate forms. This was just the beginning. So, on to the bank, where I stood in a long line, reassuringly populated with other people carrying similar forms (surely not all seeking the same sort of certificate we were after …). Eventually I paid my fee and got the requisite stamps on my form. It was then back to Interpol, where the line, nonexistent earlier in the day, now wound around the building and up into the courtyard on the (blazingly equatorial) sunny side of the building. Stay tuned to learn how many Ugandan bureaucrats it takes to produce an Interpol vehicle certificate.