A Refreshing Foot Bath In the Land of Smiles – Part I

In 2011 I went to Southeast Asia for the first time; the trip was a large group effort to help a friend celebrate a milestone birthday. We met in Bangkok then took a train to Chiang Mai where we stayed at a beautiful resort for 4 days. After Chiang Mai we traveled on to Laos before turning back southward to Ventiane, then Bangkok and flights home.

After a day at the resort I was starting to get restless for some adventure, so on the second day I rented  a scooter to ride up to the top of Doi Suthep to see the famous temple that’s located up there.

After exploring the temple and the much less-tended grounds, I had vague plans to meet some of the others at the market area in central Chiang Mai, but hadn’t realized  how big that area would be, and since I didn’t have a phone set up to work in Thailand, I had no way of finding them. This didn’t seem like a big deal, I figured I would just amuse myself for an hour or two then head back to the hotel in time to get ready for the birthday boy’s celebratory dinner.

Can you hear the ominous music?

While I was unable to find my friends, I found numerous fish pedicure spas. For those uninitiated, a fish pedicure involves plunging your feet into a tank that contains many tiny carp of a type known as doctor fish. The fish nibble the dead skin off your feet. The idea is that they remove only the dead skin right down to new, living skin, which will eventually produce exceptionally smooth feet. 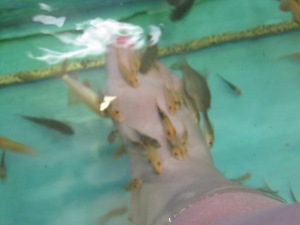 I should note: while I was looking up information on “fishicures” to write this post, I learned that it’s not as benign a business as I initially thought. The fish don’t normally eat dead tissue – they only do it when regular food is scarce and unpredictable.  As might we all. I don’t want to support a business model that starves fish for vanity, so, no more fish pedicures for me. 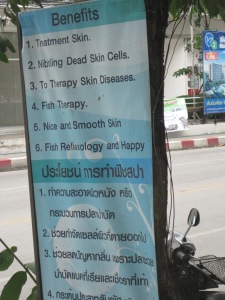 But, I didn’t know this at the time so I treated myself to what I thought would be a one-hour pedicure. (Sorry, fish!) I sat with my feet in the fish tank until the owner of the spa came and told me it was time to go. Did I mention that at all the fish pedicure places, you sit on bleacher-style seating facing the street?

But anyway, as the business owner settled up with me he mentioned that he had given me 2.5 hours for the price of one. And so it was that I was heading out of the center of Chiang Mai later than expected and an hour or so before dark. Since our hotel was about 3 miles out of town, this would seem to be a non-problem, but Chiang Mai is laid out in a way that makes it difficult for a newcomer to find the way back out of town. You come in on one road, which is very straightforward, but it’s one-way and the road back out isn’t parallel to the road in, or otherwise easy to find. So, I spent about 30 minutes of the remaining daylight riding in circles trying to find the road back out of town, and getting quite turned around in the process.

Next week tune in to learn just how long a 3-mile scooter ride can take.