Last week I debated a bike shop kid about the necessity to treat wheel-building as a complicated dark art. We pick up after I left the wheel with the kid, who swore that he would be able to make it work, even though I insisted that he had sold me spokes that were the wrong size.

Well. Several days later he called and admitted what I had already known. It was impossible to dish that wheel with those spokes. I insisted that since they had wasted my time, not only by giving me the wrong spokes but by refusing to give me the right ones when I asked, preferring to go down some silly “wheel building is an art not a science” road, it was incumbent on him to unlace the wheel and lace it up with the right spokes. In the end he was cool about it and fixed the wheel up nicely. I ride on it to this day.

Another thing that can be dead simple is cold brewed coffee. Purveyors of fancy kitchen equipment will tell you it’s complicated and that you need a very elaborate setup to make it. They’ll tell you that you need this: 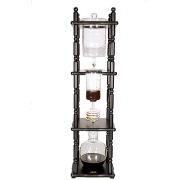 You don’t need an advanced degree to make cold brewed coffee, nor do you need special apparatus. All you need is a desire for a deliciously smooth cup of coffee and a motive to simplify your morning coffee routine.

Start with just about any beans. In the interest of science I have tried this with high-end shade-grown organic, locally roasted, fresh-ground whole beans, and I have tried it with the stuff from the giant can of Costco Industrial Roast. The fancy stuff tastes a bit better, but the cheapo stuff tastes respectable. Once you have chosen your coffee:

*For the straining step, I use a 7″ fine strainer and strain into a 4 cup measuring cup, then pour that into a jar. I used to use cloth, but it got really messy because the cloth would get full of grounds, which would get stuck in the folds and then explode forth all over the kitchen when I least expected it. The strainer is a lot easier to manage. The downside is that it lets some grinds through, but they fall to the bottom of the jar and stay there until it’s empty.