NextDo What You Do Well, and the Confidence Will Follow
AdventureTravel

A Refreshing Cocktail in the Land of Smiles – Part III

We pick up the story as I am drinking an iced coffee, with a plan to turn the cup into a gas funnel. 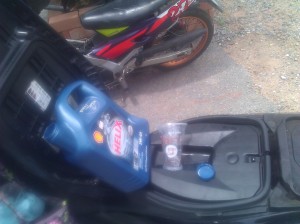 Alas, it’s not that simple. I have encountered the world’s strongest plastic cup. I try flattening it in half, thinking I will then be able to tear it along the stress cracks, but not only will it not tear, but I swear my attempts to bend and crease it only make it stronger. I try cutting through the rim with my teeth, with the idea that I’ll then rip it at the breach, but this isn’t going to work either; it’s just too thick, plus I start thinking about how unpleasant it will be if break off one of my teeth so far from home.

Finally I take the scooter key and my nail clippers and after no small effort, manage to poke a small hole in the bottom of the cup, at the corner where the bottom meets the sidewall. Like so: 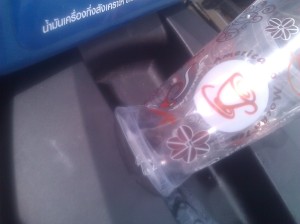 I then position this hole over the gas tank opening and pour the gas into the cup, which routes it into the tank. It works out OK.

Except … I am so focused on making sure I keep the hole in the cup in the right position that I fail to notice that a bit of gas is running down the side of the bottle and not making it into the tank. Instead it’s pooling in a little well in the cargo compartment cover. A pool of gas in the blazing sun seems like a bad thing.

I try to speed up the evaporation by rocking the scooter from side to side to swirl the gas, but it doesn’t seem to be helping much. The teenaged girls from the coffee stand come over, looking concerned. They look at me questioningly and say something, so I assume they are asking if the scooter is broken.

I again pantomime the running out of gas incident. Then, suddenly, before I can stop her, one of the girls reaches out and puts her finger in the pool of gas. She sniffs it, then they both look at the gas cap, then look at me and say “benzene!” I realize that they must have seen me with the oil bottle and think I have filled the gas tank with oil.

I somehow manage to convey that no, indeed I did use gas, and then point to the puddle of gas, attempting to explain why I haven’t started up again and headed out (I also spend a moment wondering if I look especially dumb for a tourist, but decide that they must assume all tourists are a little clueless). The older looking of the two gets a towel from the coffee stand, which she uses to soak up the puddle of gas.  I’m alarmed but all I can do is hope that she doesn’t use the towel to wash or dry dishes later.

In keeping with their apparent belief that all tourists have tiny brains (and, I can’t really argue, seeing as how I ran out of gas in the one area of Pattaya that isn’t just filthy with gas stands), they start the scooter up for me and give me some rudimentary instructions on how to drive it … from there I thank them and drive away to mutual friendly waving. I continue on my way towards the green hills and thirty minutes later I am in front of this: 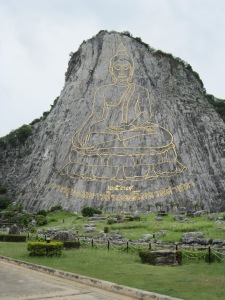 Not a bad day after all.